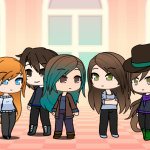 aka Thespia Aka Flower Ur worst nightmare💮

Fun fact: I can eat (and cut!) anything with a toothpick.

Favorite book📔: The Penderwicks, and my own!

Backstory: abandoned at 3 years old, she lived for several years with a family of ally cats, who gently nurtured her until she was 7. She was soon found by her adoptive mother, Ms. Amberland. she lived with Ms. Amberland until she was 11, when she became the hero she is today.

Backstory: Brynn Olive Cole was orphaned at 4 and lived in a shack. She learned of her powers when she was 7, and was never adopted because of them. She met Thespia when she was 12, and since then they've become close friends (BFFs)

Backstory: Quench is one of the secondary heroes. He has a small team called: "The Fierce-Tastic Four"

Retrieved from "https://fire-fiction-wiki.fandom.com/wiki/User:Redflower210?oldid=2473"
Community content is available under CC-BY-SA unless otherwise noted.